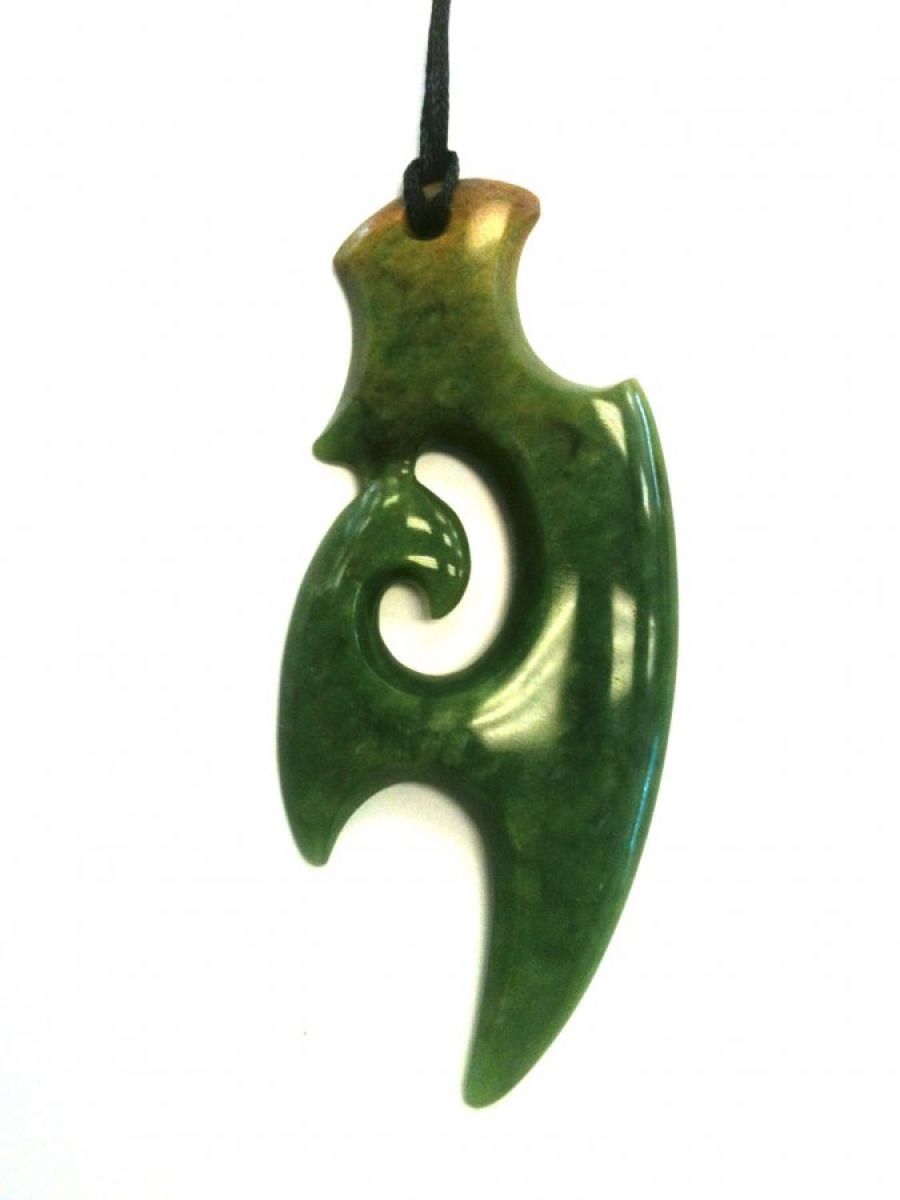 All Pounamu is sacred and highly valued by Ngāi Tahu, the most southern tribe of Aotearoa, New Zealand. Carving this sacred stone has been a cornerstone of our culture for hundreds of years and we are honoured that you have chosen to adorn yourself with this most sacred gift.

All Pounamu is sacred and highly valued by Ngāi Tahu, the most southern tribe of Aotearoa, New Zealand. Carving this sacred stone has been a cornerstone of our culture for hundreds of years and we are honoured that you have chosen to adorn yourself with this most sacred gift. This matau represent the search for knowledge/mātauranga, and has a connection to Mauī who with the sacred knowledge of his ancestor left Hawaiki and discovered Aotearoa, New Zealand. CARVED BY: Des Hetherington

At the Centre you can view New Zealand's largest range of authenticated Ngāi Tahu Pounamu (New Zealand Jade) carvings and see the carvers in action as they carve the stone.

If you would like to purchase or discuss with us any of our listed products please contact us directly at the email address below.

Pierre Tumahai is of Ngāi Tahu descent of Ngāti Waewae hapu. A traditionalist, fossicking alone at Arahura for his own Pounamu, Pierre has been collecting stone and carving for 20 years. Pierre has in-depth knowledge of the landscape and Pounamu sources, and is experienced in extraction of Pounamu. He has extracted and worked with the Pounamu boulders that now lie in the Christchurch City Council building, Meridian Energy, Solid Energy, Shotover Jet, and on two Ngāi Tahu Marae - Rāpaki and Tuahiwi. Pierre has also been a member of the Ngāti Waewae Pounamu committee since 2000, and has also been previously the chair of this committee.

Des Hetheringtons fascination and affinity with Pounamu was sparked by an encounter with an ancient Pounamu adze at Karamea on the West Coast of the South Island. It was the start of a lifelong journey of discovery .In 1968 Des family moved to the heart of Pounamu country and he began to learn about its many beautiful forms. The Kokopu, Inanga, Kahurangi and Marsden Flower jade varieties hold a special fondness with this artist. In the early seventies, and already highly creative, Des was encouraged into the art of carving the stone he so loved. Over his career Des captivation with Māori Pounamu art has grown further still and in recent years he has had the honour and fortune of being mentored in the intricacies of wood carving by a Māori master carver. Des believes this additional knowledge has infused his primarily one-off designs with a new purity and spirit.

Anthony is of Ngāi Tahu descent of Ngāti Waewae and has been working Pounamu for the past nine years, taking great pleasure from knowing that people wear his pendants proudly. Raised in Hokitika, Anthony has always been around the stone. So it was a natural step to take up carving, a calling that Anthony considers himself very lucky to do. Anthony likes to walk the rivers and creeks of the West Coast in search of the mighty Pounamu and over the years has picked up hundreds of unique pieces. Here, great satisfaction comes from being able to find a stone and turn it into jewellery and carvings.He understands also that the Arahura River is a very special place to the tangatewhenua for sourcing many different types of Pounamu, including Inanga, kawakawa, kokopu, kahurangi and totoweka. Throughout his searching Anthony, always looks forward to the day when I find a piece of Inanga like my Taua cornbeef shape Pounmau.”

Julie has been in the Pounamu industry since 2008, has been carving since 2011 and carving with Waewae Pounamu since 2013. Prior to her introduction to carving she spent eighteen months slicing Pounamu and profiling the stone. Julie carves both traditional and contemporary designs and enjoys making Kumara, Koru, Kiwi sculptures.

With 20 years of experience in all traditional and stylised carvings, Aaron Shannon now specialises in stone cutting and cabochon making for inset jewellery. He has been with the Waewae Pounamu business for over five years now and offers a considerable amount of skill and experience to our team and our customers.

Turi is of Ngāi Tahu descent of Ngāti Waewae hapu. He has had over 30 years' experience carving Pounamu, wood and also bone. Turi specialises in sculpture and unique artwork. He does various commission work for local and international organisations. Turi has grown up in Hokitika and spends much of his time walking the Awa looking for Pounamu while also learning how sacred and special our Pounamu is.

Visit our website www.waewaepounamu.co.nz for further information about us. 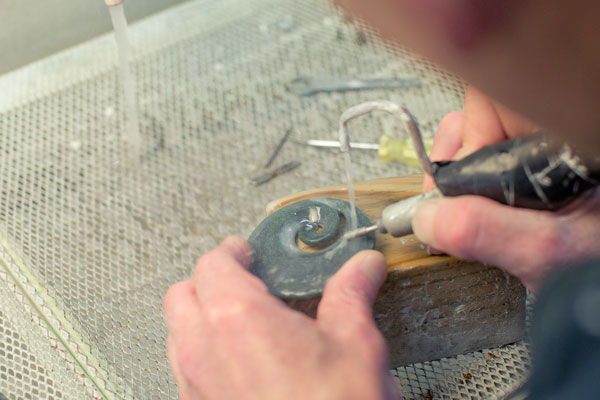 Raukaraka is the kawakawa variety that is olive green. The word literally means the leaf of the karaka tree. It may be descriptive of the leaf but, nonetheless, the origin of the name is uncertain. 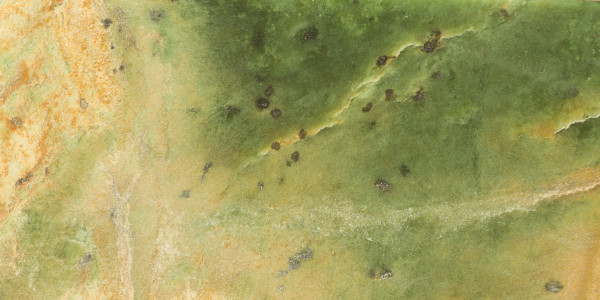 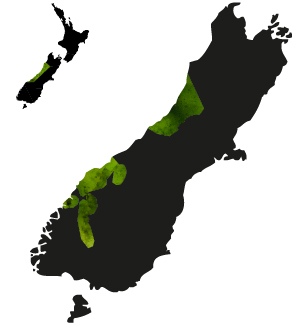 Your stone was sourced from the rivers of Tai Poutini ki te Raki, the northern region of the West Coast of New Zealand’s South Island. This area covers the rugged land just north of the Franz Josef glacier, up through the Westland towns of Hokitika and Greymouth.

This stone is a taonga (treasure) to Ngāi Tahu, and in particular the peoples of Te Tai o Poutini, the West Coast of the South Island where most pounamu is found and carved.

The stone began it’s journey here millions of years ago, the mountains of the Te Waipounamu forming in this time and, in doing so, pushing the narrow bands of earth containing Pounamu up to the surface. From here the action of rivers and glaciers released the stone from its host rock into screes, river gravel and glacial deposits.

This stone is now yours to protect, to treasure and, eventually, to pass on to the next generation.

Please wait, this may take a while